Fierce competition in the digital piano market has led to a great outcome. The consumer is spoilt for choice with instruments that are constantly upgraded in their sound quality, action and features.

Many companies attract buyers of digital pianos by packing them full of features, but sacrifice on sound quality and touch.

Kawai have attended to the requests of the most discerning of customers.

Purists, are forever asking if it sounds and feels like a real piano. With the CE220, Kawai have risen to the challenge and produced a quality instrument that is satisfyingly piano-like, both to the ear and to the fingers.

Piano sounds are notoriously difficult to sample accurately across the range of the instrument. Kawai’s Progressive Harmony sound technology has produced a well-sampled piano sound that reflects the gentler, warm sounds characteristic of Kawai’s acoustic counterparts.

The low registers have a sonorous depth, without being “boomy” and overly “bassy”. Middle registers produce a warm enveloping tone that fills the space and gives the listener a sense of being able to connect with the tone. The higher register provides a clear ringing resonance that is not overly enhanced by reverb.

The connection between the registers is seamless, bringing nice cohesion across the range of the instrument.

Too often the different registers of digital pianos sound like the come from three different instruments.

With the CE220, your virtuosity will be complemented with a unified tone from note 1 through to 88.

Alongside the beautifully toned piano sounds, an accompanying section of strings, organ, choir and other tones add some versatility and provide a ready backdrop for the piano tones, using the layer function.

A nice touch on the layering process is that the dynamics for the layers can be set individually, allowing for exact expression while playing.

The increased 192-note polyphony also allows for greater expression and the ability to handle some really fast passage work on the instrument. This is nearly a third more than most conventional digital pianos on the market today.

It gives the user far more acoustic accuracy for passages that include arpeggiated notes and sustained glissandos, such as those by Debussy for example. 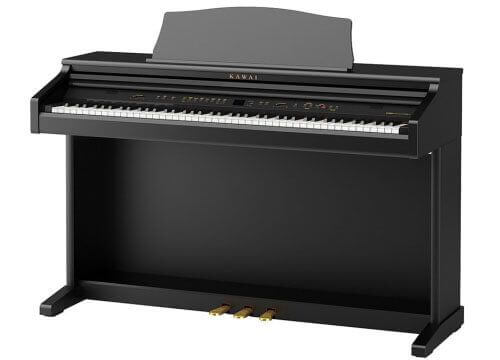 Kawai have pioneered the AWA PROII graded hammer action technology. This gives the keyboard the feel of a real acoustic piano with slightly heavier keys on the bottom end and lighter playing keys in the upper registers.

While the feel is exceptionally realistic to that of Kawai’s acoustic grands, the keys are a little stiffer to play on and may be a little difficult for the younger musician to embrace.

Having said that, there is no doubt that the graded action gives a more natural feel to the playing of the instrument and experienced musicians, particularly those who have grown up on Kawai electric piano will feel at home with the familiar response from the wooden keys.

The range of effects available, also add to the sensitivity and adjustment of the touch to allow for fine control for the ultra-sensitive musician.

Musicians critical of the volume control on digital instruments will find that the CE220 offers a pleasing response from pianissimo to fortissimo.

The CE220 also has a function that allows users to establish their own touch from very soft to very loud. This then adjusts the keyboard to the users playing strength.

In fact a range of touch features form sensitivity to tuning and temperament gives the user ultimate control in establishing the instrument to exact user specifications.

Top musicians might try out a hundred different acoustic instruments before they find one that looks and sounds the way they want it to.

The Kawai CE220 gives you options to adjust the touch, feel and sound to your individual needs as a musician. 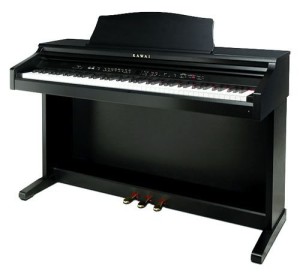 Warranty: 3 Years on Parts and Labor

The instrument has 22 preset sounds for instruments that include, strings, chorus, organ, harpsichord, electric piano and synth.

With the range of effects including reverb, delay and chorus, one can really create the right sound for each preset.

There are also two rotary effects suited to the organ sounds giving an authentic response to them. The string resonance feature, unique to Kawai, also gives a more authentic feel to the instrument allowing certain notes to resonate when others are being played, just like they do in an acoustic instrument.

This gives added realism and complexity to the sound, which the finest ear will find difficult to discern its digital origins.

The octave shift allows you to expand the range of the keyboard and the layer shift is a neat feature that lets one layer play an octave lower or higher than the other.

This makes for some wonderful expression while playing in a live setting. As you know from our digital piano reviews, it is not commonly found on other instruments.

Also uncommon is the ability to set the dynamics on each layer, so as to balance the two voices against each other.

Usual split functions are also available but an interesting one is the ability to split the instrument into two 44-key pianos centered around C4.

The keyboard includes an on-board metronome and pedal functions including a half-pedal feel for accurate expression of the most advanced piano pieces.

Some 29 preset pieces demonstrate the range of pieces that can be played effectively on the instrument and offer great inspiration to those learning the instrument.

Each piece can be adjusted to listen to the separate hands of the piece. (Useful for learning to play them).

The instrument also has a 2-track recorder and can record three songs in real time. This allows the user to hear performance playback and learn from errors.

One can record a left hand separately on one track and then the right hand on the other to use in practice and for learning difficult technical passages.

A range of outputs and inputs, including midi, earphone jacks and USB allow the user to plug in devices that can link to recording software as well as allow for silent practice (when the family just don’t need to hear that piece again).

The stereo outputs allow the device to be connected to any sound system for amplification.

The USB port also allows one to save any pieces for playback later and this means less need for on-board memory as any memory devices can be linked to the instrument.

The transpose function allows for quick easy transposition for the musician unfamiliar with certain keys. This is the equivalent of the capo for guitarists.

If I were to pick one feature which eclipses all others that make this digital piano stand out, it would be its individual tailoring to touch sensitivity.

Nothing in the digital piano world offers anything remotely similar and for this reason alone I would purchase one.

I particularly liked the ability to adjust the dynamics of the individual layers of the different instruments.

Too often on digital instruments the one layer overpowers the other and this feature gave more performance control to the user, making musical expression that much more suited to the individual’s taste.

The 3-pedals akin to that of Kawai’s acoustic grand pianos also add to the authenticity of the digital counterpart and lend the instrument a touch of grandeur. The pedalling also felt very natural and expressive for a digital instrument.

Complementing the already superbly sampled sounds, the range of added effects allow for a tailor-made timbre to suit every ear. And the ability to tailor-make the touch makes it ideal for creating the desired response from the instrument.

The cost also puts it at the top of its league in terms of value for money based on features available, tonal quality and look. An acoustic instrument that sounds this good could easily cost five times the price.

I also liked the fact that the instrument looked and felt solid. Some digital pianos make one feel cautious to play really strongly.

The CE220 remained satisfyingly stable even when playing some dynamically expressive pieces.

One can attack the keys with a strong sforzando and not feel as if the keys are being strained beyond their capability.

Kawai has a very specific feel on its pianos and this may not always suit every person’s touch. Some of my students find the keys a little on the stiffer side.

I also didn’t see much use for the splitting function into two pianos other than for playing along with absolute beginners in a teaching situation.

Using it to play duets was not very practical. It may have been a good idea on the drawing board but the practical use of two 44 key pianos on one keyboard seemed to be more of a frustration than a help as I kept running out of keys.

Although not overweight, the instruments shape doesn’t make it very portable and it would not be a good buy for the travelling performer.

Having said that, it beats having to transport a grand piano and offers the sound of one for a much easier commute, and it is fairly easy to disassemble and pack into a smaller compartment, although it will take two people to reassemble the panels.

The metronome doesn’t allow for more complicated time-signatures such as 5/4 and the rhythm presets are a feature that is nice to toy around with for feel but doesn’t offer any real performance enhancement to the instrument.

With drum programming being for more advanced today, the rhythm insert feels more like a return to the early 80s when this feature was a standard newbie on all electronic keyboards.

Personally I could do without them since they feel ‘gimmicky’ rather than an added feature.

While the adjustment of touch features are great for expert players who know what they are looking for, they can wreak havoc with the beginner musician learning to control their own dynamic expression through touch and pressure sensitivity.

If the instrument is being used as a teaching or practicing instrument for a beginner, it may be advisable to use these features sparingly until real touch sensitivity has developed in the player.

All said and done the CE220 is a stylish, sleek and good-looking digital piano that is competitively priced, laden with useful features and sounds like the real deal.

Even seasoned acoustic musicians will find it tough to ignore the excellent reproduction of tone and feel on this digital piano.

The black satin finish and matching piano stool gives an elegant look to the instrument, making it a stylish piece of furniture to any home, or even larger venues like churches, concert halls and the like.

As a teaching piano, professional performance instrument or family play-along instrument, there is no doubting its suitability for a wide range of musicians.

Kawai may just get into the lead of the digital piano race with this versatile and beautiful instrument.

If you have ever thought of changing your brand of digital instrument the Kawai digital piano CE220 is a good enough reason to do so.